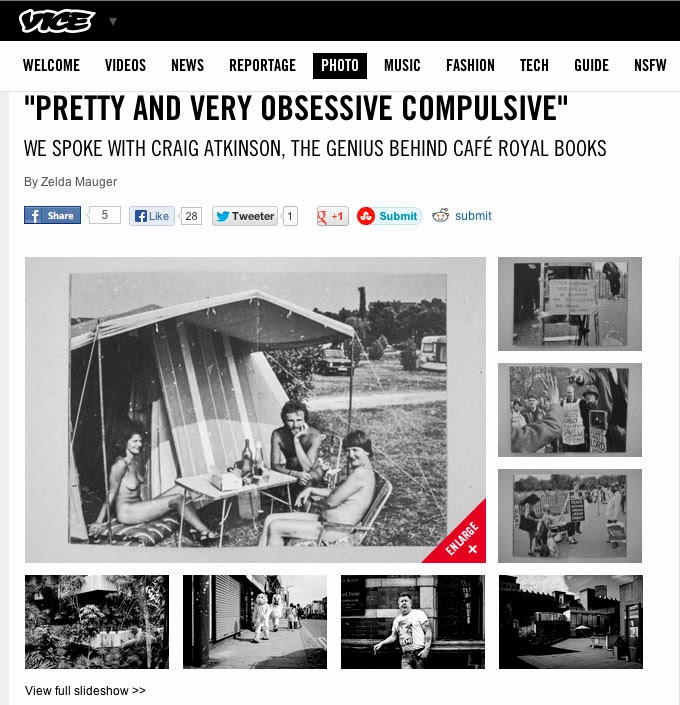 
View full slideshow >>
Craig Atkinson  is the first illustrator I fell in love, and I love just as the editor and photographer he is today. The first time I bought her zines, he sent them to me in a large cardboard envelope decorated with a super nice stamp: I kept it for years, just because it was his handwriting on. And I am not the only groupie to do that, since even the Tate Modern buys most of his books to his collection.
In 2005, Craig Atkinson founded Café Royal Books , his publishing house, after several years bosser painting and illustration. Today photography, collecting, and prints the remains of a changing England, compiling a sort of inventory of what happened on the other side of the shuttle over the past thirty years.
With CRB, Craig published at the rate of one a week, sometimes every two weeks, small photozine that seem straight out of an inkjet desktop printer. Each book has a sort of theme, treated by a photographer, often Craig himself but also other talented guys like John Claridge ,Phil Marxwell  or John Darwell . His photozine are published only 150 copies - the last one I caught was passed in 56 minutes after its release. This is super nice, and it only costs 5 pounds. I wrote to him to discuss social change in England, dandruff anonymous picture and its obsessive character. VICE: You were more in the picture before. How was your transition to the photo when you created Café Royal?
Craig Atkinson: I'm still doing a lot of illustration, and I always file illustration courses, too. At first I painted, and now I draw, I take pictures and I do books. I started making books in order to show my work quickly, internationally, without it costing me too much. I use the picture to document things quickly. Speed ​​plays a big role in what I do.
It's been seven years since you created CRB. Knowing that you print about one pound per week, you must have an impressive catalog. I was disappointed not to find a website that brings together all your archives.exist partial online archive . I need an intern to do it, or time to do it myself. This is a huge job. I have published something like 150 or 200 books so far. It is not so impressive as that, but I'm all alone to do. I would like to have a complete record, but I lack time.
I feel that you are a compulsive collector enough - sometimes you do not even know what you collect, or what connects your fanzines them ... Nuclear, central geometric architectures, London moaners, the doorways ... What's the link between all this?
I'm pretty compulsive and very obsessive. I like to collect things, but I like the space and I hate the mess, so the printed objects is the ideal, as digital. But somehow, the printed objects comfort me. And it made a little black and white grainy? Your photos often appear to be ten or twenty years older than it is.
Sometimes I rework my own pictures in a rather crude way. I do not touch the pictures send me other artists, however, unless it is necessary. But some images back to the 1960s.
So you do not limit yourself to a single period. You select the series that almost forty years, and other more contemporary. Just after releasing South Liverpool 1976-1982 , you published London Circus , the London today.
Yes indeed, London Circus is a series that dates back to the summer of 2013, while Liverpool photos by Phil Maxwell date from the 1970s and 1980s - a particularly difficult time for the people of Liverpool. Shooter here today would still be interesting, but what interests me above all is that the social and political challenges are documented. I do not deny the current changes in the UK, with all the shops of the main commercial arteries are closing the door, but I do not think they are as important as when the mines closed or the docks collapsed.
And photographers that you publish Café Royal: it is you who contact them, or the ones who send you their work?I would say half and half. I invite other artists to participate, and send me some suggestions. I never have anything specific in mind, so I really try to not get anything, exactly. If a topic is to develop, the better. About "Someone Else's ..." series: it is quite surprising that the film strangers stick to this point most of your other publications. How do you obtain them?
I buy cameras used. I buy only if they still have a film inside. Most of the time, there is nothing about the film, but sometimes they contain enough shots to set up a kind of narrative. I allow myself time to think and I publish some photos.
CRB was quite successful, it seems. Your fanzines are exhausted very quickly, sometimes an hour after they went on sale, and the Tate acquired for its collection. What is your next project?CRB is a success indeed. Many galleries collect my books, and many bookstores sell worldwide. I have a lot of projects under discussion. In October, I invited John Claridge to return to England to talk about his job and start a new book containing his work on the Ribble Steam Railway in Preston. I also have new books on the brutalist architecture in London and bus stations Preston.More tips for Phil Maxwell, Hugh Hood, John Claridge Homer Sykes and Jim Mortram ...
I can not wait. Thank you Craig!